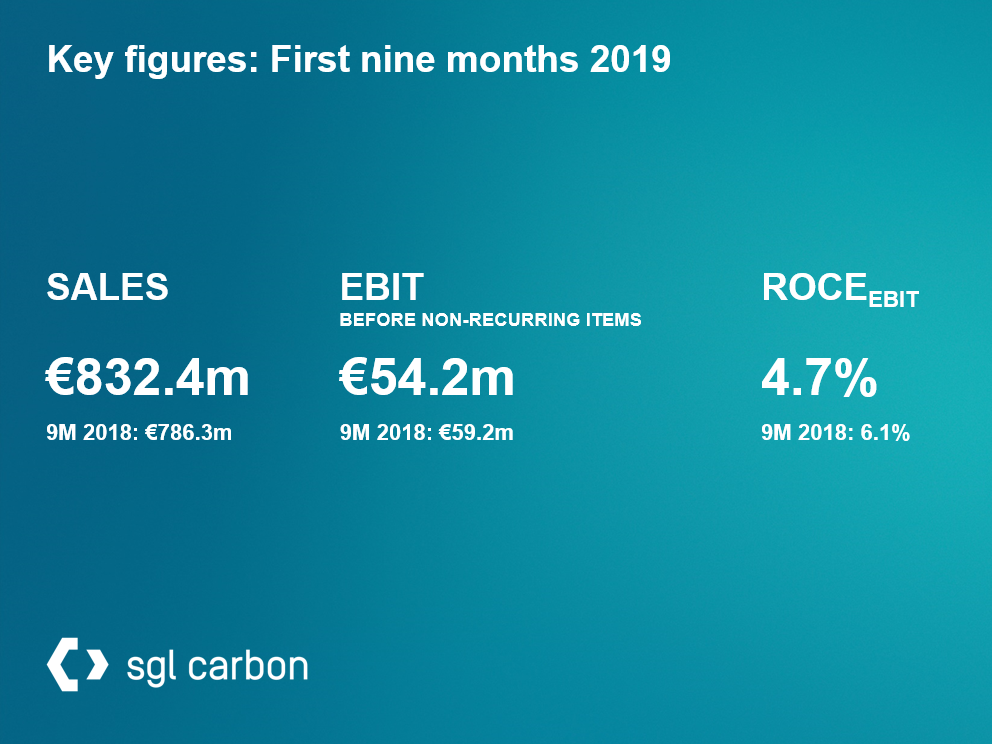 In the third quarter 2019, the business units of SGL Carbon developed very differently. While Graphite Materials & Systems (GMS) showed better than expected results, Composites – Fibers & Materials (CFM) deteriorated compared to the two previous quarters. This is attributable to the weaker development in the market segments Textile Fibers and Industrial Applications. In total, sales revenue in the first nine months 2019 grew by approximately 6 percent to reach 832 million euros. Recurring Group EBIT after nine months reached approximately 54 million euros. Adjusted for a positive one-time effect in the prior year, this was comparable to the prior year level.

In its ad-hoc notification of October 25, 2019, the company revised its guidance for recurring EBIT of CFM downwards to a negative mid to high single digit million euro amount. On the Group level the company now expects a recurring EBIT at 45 to 50 million euros. Due to the lower starting point in 2019 as well as the ongoing weakness in the market segments Textile Fibers and Industrial Applications in the business unit CFM a non-cash impairment charge in the amount of approximately 75 million euros was recorded in the third quarter 2019. In recent years acquired assets of the former joint ventures with BMW and Benteler were not affected by this impairment. In addition, the impairment charge of CFM led to a valuation allowance on deferred tax assets in the amount of 7.4 million euros. Against this background, SGL Carbon now expects a net result of approximately minus 100 million euros for fiscal year 2019.

In order to improve the results of CFM, SGL Carbon initiated comprehensive countermeasures. Amongst others, it includes a targeted staff reduction of around 3 percent in the business unit CFM and an accelerated conversion of textile fiber production lines into precursor production lines for carbon fiber production. Additionally, product mix improvements in the Industrial Applications and Textile Fibers market segments as well as selective price increases are planned. Furthermore, the company’s growth in the aerospace business is to be accelerated.

“The growth in our core markets shows that our overall strategic direction is right,” says Dr. Michael Majerus, Spokesman of the Board of Management of SGL Carbon. “In the specialty graphite business, we have been able to increase our revenue and earnings beyond our expectations. In the CFM business unit, the structural growth drivers remain intact in our strategically relevant markets. In the automotive segment, we have seen a growing number of composite material projects driven by electromobility. We will also accelerate growth in the higher-margin aerospace business. The countermeasures to improve earnings of the CFM business unit will be implemented consistently.”

Recurring EBIT in the business unit CFM declined significantly in the third quarter 2019 compared to the first two quarters of the year. The main reason for this development was the deterioration in the market segments Textile Fibers, Wind Energy und Industrial Applications. The earnings decline in the market segment Wind Energy was due to the unfavorable product mix. Despite the temporary stabilization in the second quarter, earnings in the market segment Textile Fibers declined substantially in the reporting period. Main driver was the continued weak demand for acrylic fibers due to the challenging economic environment as well as substitution effects toward polyester in important end markets. As a result, recurring EBIT in the first nine months 2019 was at minus 1.8 million euros and thus substantially below the prior year period of 20.9 million euros. Return on capital employed (ROCE) based on recurring EBIT in the business unit CFM reached minus 0.3 (previous year: 4.6) percent.

Due to the significant deviation from the expectations for the business unit CFM communicated in August 2019, SGL Carbon accelerated the preparation of the new five-year plan. Mainly due to the lower starting point in 2019 as well as the ongoing weakness in the market segments Textile Fibers and Industrial Applications, the company carried out an impairment testing, which led to a partial impairment loss in the amount of 74.7 million euros. The impairment charge relates only to the cash generating unit CF/CM (Carbon Fibers/Composite Materials) and was recorded in the third quarter 2019. Further non-recurring items included mainly the additional depreciation of minus 6.5 million euros relating to the purchase price allocation of the SGL Composites companies. The first nine months of the prior year period included a positive effect in the amount of 28.4 million euros. As a result, EBIT after non-recurring items declined from 39.0 million euros in the first nine months 2018 to minus 82.8 million euros in the reporting period.

In the first nine months 2019, sales in the reporting segment GMS at 471.3 million euros increased by approximately 8 percent (currency adjusted by approximately 6 percent) year-over-year. Main driver for this strong development was the market segment Automotive & Transport, which grew more than proportionately and was able to increase its sales by more than 30 percent. The market segments Semiconductors and LED were also able to record a substantial double-digit percentage increase in sales. Slight growth was posted in the market segments Industrial Applications and Chemicals. Sales in the market segment Battery & other Energy remained below the prior year level as expected, while in the market segment Solar, sales were again limited to below the prior year level to prioritize sales to the semiconductor and LED industries. In total, recurring EBIT of the first nine months 2019 increased more than proportionately by 19 percent to 70.9 (previous year: 59.5) million euros. This led to a higher EBIT margin that increased from 13.6 percent to 15.0 percent due to improved results in the market segments Semiconductors, LED, Chemicals and Industrial Applications. The market segment Solar was the only segment that posted results slightly below the prior year level. Return on capital employed (ROCE) based on recurring EBIT of the reporting unit GMS reached 16.9 (previous year: 16.0) percent.

In the first nine months 2019, sales in the reporting segment Corporate increased by 27 percent (no currency effect) year-over-year to 32.5 (previous year: 25.6) million euros mainly due to higher sales in the market segment Energy. This relates to sales of the central research & development department (Central Innovation) for fuel cell components. Recurring EBIT at minus 14.9 million (previous year: minus 21.2 million) euros improved substantially compared to the prior year period even though the prior year period included a positive effect from a land sale in the amount of 3.9 million euros. This development was mainly the result of increased earnings contributions from the business with fuel cell components and from lower expenses for management incentive plans following the strong earnings decline at CFM and thus also in the Group.

As of September 30, 2019, total assets of SGL Carbon amounted to 1,539.7 (December 31, 2018: 1,585.1) million euros. Per end of September, equity attributable to the shareholders decreased significantly to 409.4 (December 31, 2018: 531.6) million euros. This results in an equity ratio of 26.6 (December 31, 2018: 33.5) percent. The reduction is mainly attributable to the net result of minus 74.5 million euros, which was impacted by an impairment charge. In addition, the lower pension discount rate environment in Germany and the USA resulted in an adjustment to equity, without an effect on the profit and loss statement. In contrast, positive foreign currency changes had a positive impact on equity.

The fiscal year 2018 was impacted by positive effects from the initial adoption of IFRS 15 as well as positive non-recurring items resulting from the full consolidation of the former SGL ACF. This high comparative base influences the outlook for the current year. In addition, SGL Carbon acknowledges reports on a global economic slowdown. Nevertheless, the company continues to anticipate a mid-single digit percentage Group sales increase for 2019, which will mainly be volume driven.

As announced on October 25, 2019, the weakness in the market segments Textile Fibers and Industrial Applications in the reporting segment CFM will continue into the final quarter of 2019. SGL Carbon therefore now expects a Group recurring EBIT in the range of 45 to 50 million euros.

For fiscal year 2019, SGL Carbon continues to expect capital expenditures of approximately 100 million euros after 78 million euros in the prior year. Net financial debt at year-end 2019 is still anticipated to increase by a mid-double-digit million euro amount compared to the year-end 2018 due to higher capital expenditures and increased interest costs. However, the risks of not achieving this target have risen in light of the earnings decline at CFM.

With the issue of the convertible bond 2018/2023 in September 2018, the corporate bond 2019/2024 in April 2019 as well as the syndicated loan agreed in January 2019 in the amount of 175 million euros (which remains undrawn) SGL Carbon is financed through to 2023 with respect to existing financial liabilities.

Guidance CFM: Slight increase in sales and negative recurring EBIT expected; improvement measures are expected to improve results meaningfully only in the next year

For the full year 2019, SGL Carbon expects a slight increase in sales year-over-year in the reporting segment CFM, mainly driven by the market segment Wind Energy.

The market segments Textile Fibers and Industrial Applications have developed substantially weaker than initially expected. Despite the strong growth in the market segment Wind Energy, a substantial year-over-year earnings decline is also expected in this market segment due to the deteriorated product mix. Consequently, SGL Carbon now anticipates a negative mid to high single digit million euros recurring EBIT. The earnings improvement measures introduced predominantly in the market segments Textile Fibers and Industrial Applications are expected to improve results meaningfully in the next year.

In the prior year, sales and recurring EBIT in the reporting segment GMS were substantially positively impacted by the initial adoption of IFRS 15. In spite of this, SGL Carbon now expects a slight increase in both KPIs in the full year 2019 due to the very good business development in the first nine months 2019 and even though the company anticipates a decline in the final quarter of 2019. SGL Carbon continues to plan lower volumes as well as a targeted reduction of inventory levels, which will lead to a lower fixed costs absorption but improve free cash flow.

The business unit GMS should therefore once again exceed the target EBIT margin of 12 percent (before non-recurring items) and thus confirm that this business model is robust even in a weakening global economic environment. 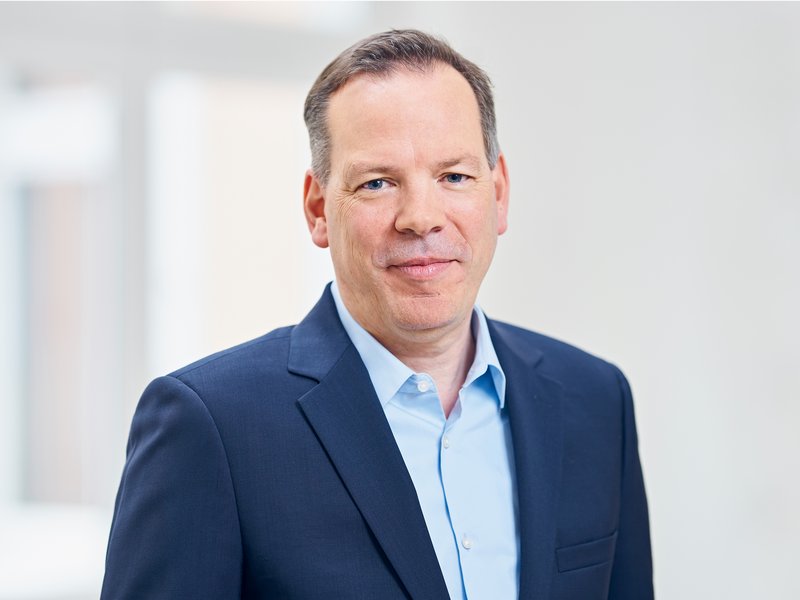