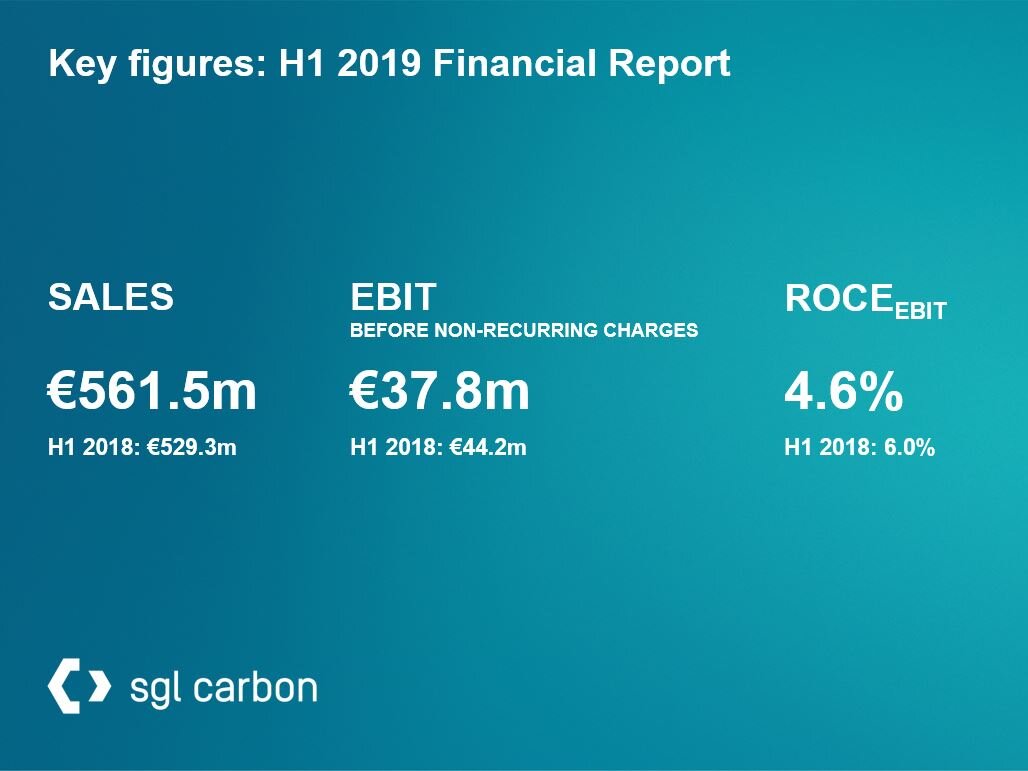 Against the backdrop of a slowing global economy, SGL Carbon held up well in the first half of 2019. Sales revenue grew by approximately 6 percent compared to the previous year to reach 562 million euros. Adjusted for a positive one-time effect of around 4 million euros in the prior year, Group recurring EBIT reached nearly 38 million euros, approximately 2 million euros below prior year’s first half. Recurring EBIT in the business unit Composites – Fibers & Materials (CFM) decreased significantly, whereas business unit Graphite Materials & Systems (GMS) substantially increased its recurring EBIT. SGL Carbon therefore confirms its guidance for the fiscal year 2019 and anticipates a mid-single-digit percentage sales increase and a group recurring EBIT on the prior year level. As previously guided, a break-even consolidated net result is expected. In this context, it should be noted that the prior fiscal year benefited from a non-cash positive non-recurring item of about 28 million euros resulting from the full consolidation of SGL ACF. In addition, for the year 2019 the company plans increased expenses in the financial result from the refinancing measures implemented lately.

“Despite a cooling global economy, demand for our solutions continued to be high, especially in the digitization, energy and chemicals markets," says Dr. Jürgen Köhler, CEO of SGL Carbon. “As expected, business unit GMS will continue to perform on the high prior year level. Following the weak performance of our CFM business unit during the first half of the year, we have initiated comprehensive measures to improve results. Overall, we confirm our guidance for the fiscal year.”

Corporate: Increase in sales revenue; earnings on prior year level

In the first quarter 2019, sales in the reporting segment Corporate increased by 20 percent (no currency effect) to 21.1 (previous year: 17.6) million euros mainly due to substantially higher sales in the market segment Energy. This relates to sales of the central research & development department (Central Innovation), that almost doubled to reach 5.3 million euros and related mainly to the business with fuel cell components. Recurring EBIT reached minus 13.5 million euros and was thus at the prior year level. However, the prior year included a positive effect from a land sale in Canada in the amount of 3.9 million euros. Adjusted for this effect, EBIT improved substantially due to the non-recurrence of costs relating to last year’s implementation of the Operations Management System (OMS), high one-time income from services provided to the former graphite electrode business, as well as lower net expenses of the central research and development activities. These were 0.7 million euros below the prior year level due to the increased earnings contribution from the business with fuel cell components.

As of June 30, 2019, total assets of SGL Carbon were at 1,784.7 million euros, an increase of 12.6 percent compared to year-end (December 31, 2018: 1,585.1 million euros) mainly due to the cash inflow from the corporate bond issued in April 2019. Equity attributable to the shareholders decreased by 4.8 percent to 506.2 million euros. The reduction is mainly attributable to the lower pension discount rate environment in Germany and the USA. Overall, the equity ratio as of June 30, 2019 decreased to 28.4 percent (December 31, 2018: 33.5 percent), not only due to the negative impacts from the pension discount rate changes but also because of the temporary increase of total assets. Adjusted for the full repayment of the convertible bond 2015/2020 and the resulting reduction in total assets in July 2019, the pro forma equity ratio as of June 30, 2019 was 31.5 percent.

The fiscal year 2018 was impacted by positive effects from the initial adoption of IFRS 15 as well as positive non-recurring items resulting from the full consolidation of the former SGL ACF. This high comparative base influences the outlook for the current year. In addition, the company acknowledges reports on a global economic slowdown. Nevertheless, SGL Carbon continues to anticipate a mid-single digit percentage Group sales increase for 2019, which will mainly be volume driven. Group EBIT (before non-recurring items and purchase price allocation) is expected to stabilize on the prior year level, which recorded a substantial increase over 2017.

After a consolidated net profit of approximately 41 million euros in the fiscal year 2018, the company expects a break-even consolidated net result in the fiscal year 2019. It should, however, be noted, that the previous year benefited from a non-cash positive non-recurring item in the amount of 28 million euros relating to the full consolidation of SGL ACF. In addition, SGL Carbon plans increased expenses in the financial result mainly from one-time effects in conjunction with the early repayment of the convertible bond 2015/2020 and the issue of the corporate bond in April 2019 to refinance maturities due at the end of 2020. With this bond and the 175 million euros syndicated loan signed in January 2019, the company has completed its refinancing measures and is financed until 2023 with respect to existing financial liabilities.

For fiscal year 2019, SGL Carbon continues to expect capital expenditures of approximately 100 million euros after 78 million euros in the prior year. Net financial debt at year-end 2019 is anticipated to be a mid-double-digit million euro amount higher than at year end 2018 mainly due to higher capital expenditures as well as increasing interest expenses. SGL Carbon will, however, remain within its target leverage ratio, i.e. the ratio of net financial debt to EBITDA, of below 2.5. As previously announced, the target gearing level of approximately 0.5 could temporarily be exceeded due to additional capital expenditures in the years 2019 through to 2021.

As described in the interim report on the first quarter 2019, the initial quarter was the weakest quarter of this year. SGL Carbon was already able to improve earnings in the second quarter, albeit not in a meaningful magnitude. Nevertheless, the company adheres to its previous guidance, even though the market segment Industrial Applications is developing weaker than expected and the subdued first half increases risks to achieving the full year target. SGL Carbon has therefore implemented comprehensive measures to improve results especially in the market segment Textile Fibers, which should begin to support earnings already this year.

Therefore, SGL Carbon continues to expect a mid-single-digit percentage sales growth, mainly driven by higher volume growth. Recurring EBIT in this business unit should approximately reach the prior year level, as the company anticipates higher project billings (market segment Aerospace) and an improved product mix (market segment Automotive) in the second half-year. In addition, the second half-year should benefit from the implemented measures to improve earnings.

In the prior year, sales in the reporting segment GMS was substantially positively impacted by the initial adoption of IFRS 15. Against this background, for the fiscal year 2019, SGL Carbon continues to anticipate sales approximately on the same high level of the prior year. The same applies to the EBIT in the business unit GMS, which was also boosted by positive IFRS 15 effects in 2018. Despite the strong first half, SGL Carbon expects full year 2019 EBIT approximately on the same level as in the prior year, as the company is planning somewhat lower volumes as well as reducing inventory levels, which will lead to a lower fixed costs absorption but improve free cash flow. GMS should therefore once again exceed the target EBIT margin of 12 percent (before non-recurring items) and thus confirm that this business model is robust even in a weakening global economic environment.