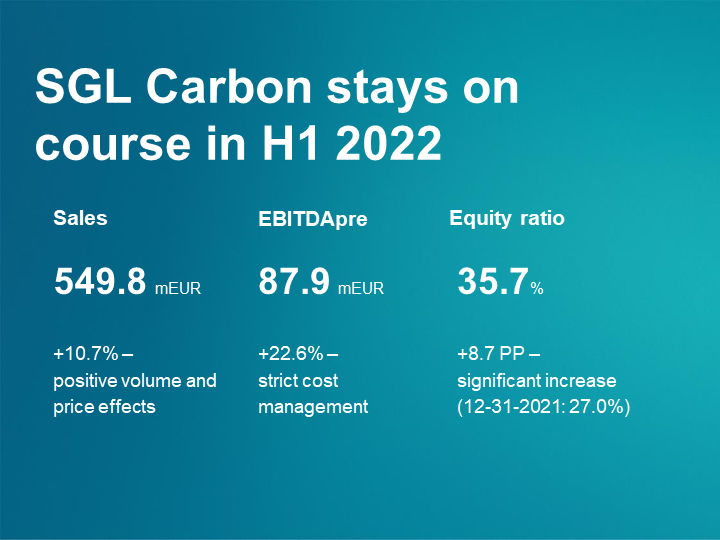 Despite uncertain general conditions in the first six months 2022, SGL Carbon's business model is proving its resilience. After €270.9 million in Q1 2022, SGL Carbon was able to increase sales to €278.9 million in Q2. Accordingly, sales for the first half of 2022 amount to €549.8 million, which corresponds to a sales plus of €53.1 million or 10.7% compared to the same period of the previous year.

The increase in sales was driven in particular by customers in the semiconductor industry and growth in the industrial applications market segment. Demand from the automotive and chemical industries was also encouraging.

EBITDApre, as one of the Group's key performance indicators, improved by €16.2 million (+22.6%) to €87.9 million (H1 2021: €71.7 million). Consequently, the EBITDApre margin increased from 14.4% to 16.0%. In addition to the higher utilization of production capacities due to higher sales, the improvement in earnings was also driven by the largely successful passing-on of higher raw material and energy costs to customers as well as savings from the transformation program.

EBITDApre does not include positive one-off effects and non-recurring items totaling €10.6 million (H1 2021: minus €5.2 million). As a result, EBIT in H1 2022 increased significantly from €38.3 million to €69.6 million. Taking into account the financial result of minus €16.6 million (H1 2021: minus €14.0 million), consolidated net income for the first six months of the current fiscal year amounted to €48.8 million, compared to €17.9 million in the prior-year period.

With an increase in sales of €22.2 million (+10.0%) to €243.4 million, the Graphite Solutions (GS) business unit made a major contribution to SGL Carbon’s sales growth. In particular, continued high demand from customers in the semiconductor sector, which represents approximately one third of the segment's sales, led to the positive business development in GS. As a result of the predominantly high-margin business, EBITDApre at GS improved by 22.7% to €54.0 million.

The Carbon Fibers (CF) business unit benefited in the 1st half 2022 from final deliveries to a major automotive manufacturer whose contract expired as scheduled on June 30, 2022. Segment sales increased by 5.8% year-on-year to €176.0 million. In contrast, EBITDApre at CF decreased by €4.2 million to €28.2 million despite the good order situation and successful price increases. It should be noted that CF was impacted by a special effect from energy derivatives for price hedging in the amount of €9.2 million in the first quarter of 2022.

With an increase in sales of 15.6% to €69.6 million, the Composite Solutions (CS) business unit continued its upward trend. The specialist for customized component solutions for the automotive industry improved its EBITDApre from €5.7 million in the first half of 2021 to the current €9.7 million, based in particular on price and volume effects.

Working capital rose by 11.7% to €381.1 million as of June 30, 2022. This was mainly due to higher inventories (€ +73.9 million) and an offsetting increase in trade payables (€ +29.0 million). A targeted build-up of inventories in critical raw materials due to disruptions in transport routes and the recent Covid lockdown in Shanghai were some of the reasons for the higher inventory levels.

On June 7, 2022, SGL Carbon raised its sales and earnings guidance for fiscal year 2022. The company now expects sales of €1.1 billion (previously: around €1.0 billion) and EBITDApre of €130 - 150 million (previously: €110 - 130 million). Based on the pleasing business development, realized price increases, a stringent cost management, and taking into account the currently known risks, SGL’s management expects to achieve the earnings forecast for 2022 at the upper end of the stated range.

Further details on business development and outlook can be found in the Group's interim report for the first half 2022.

Key figures of the first half 2022 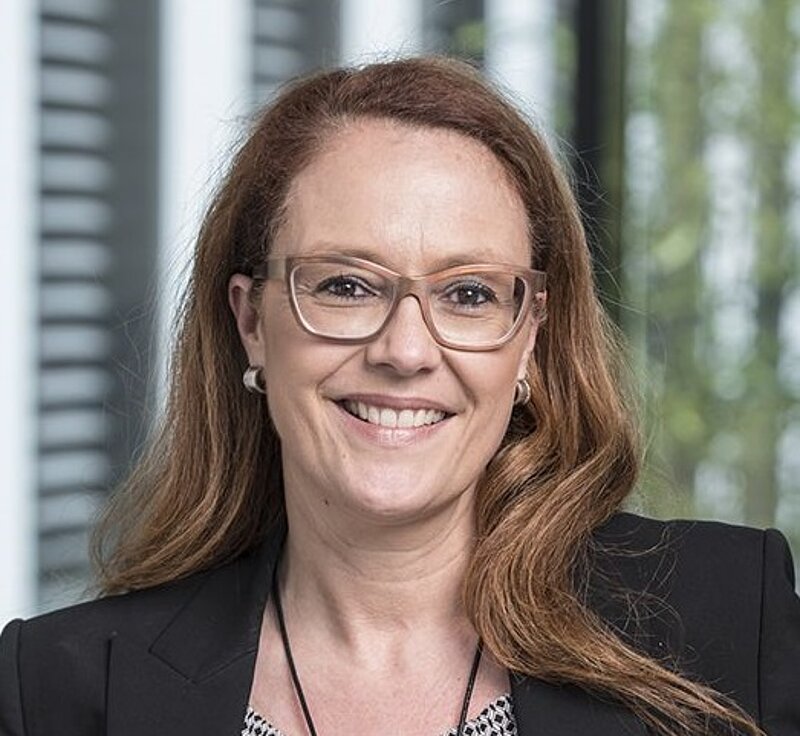