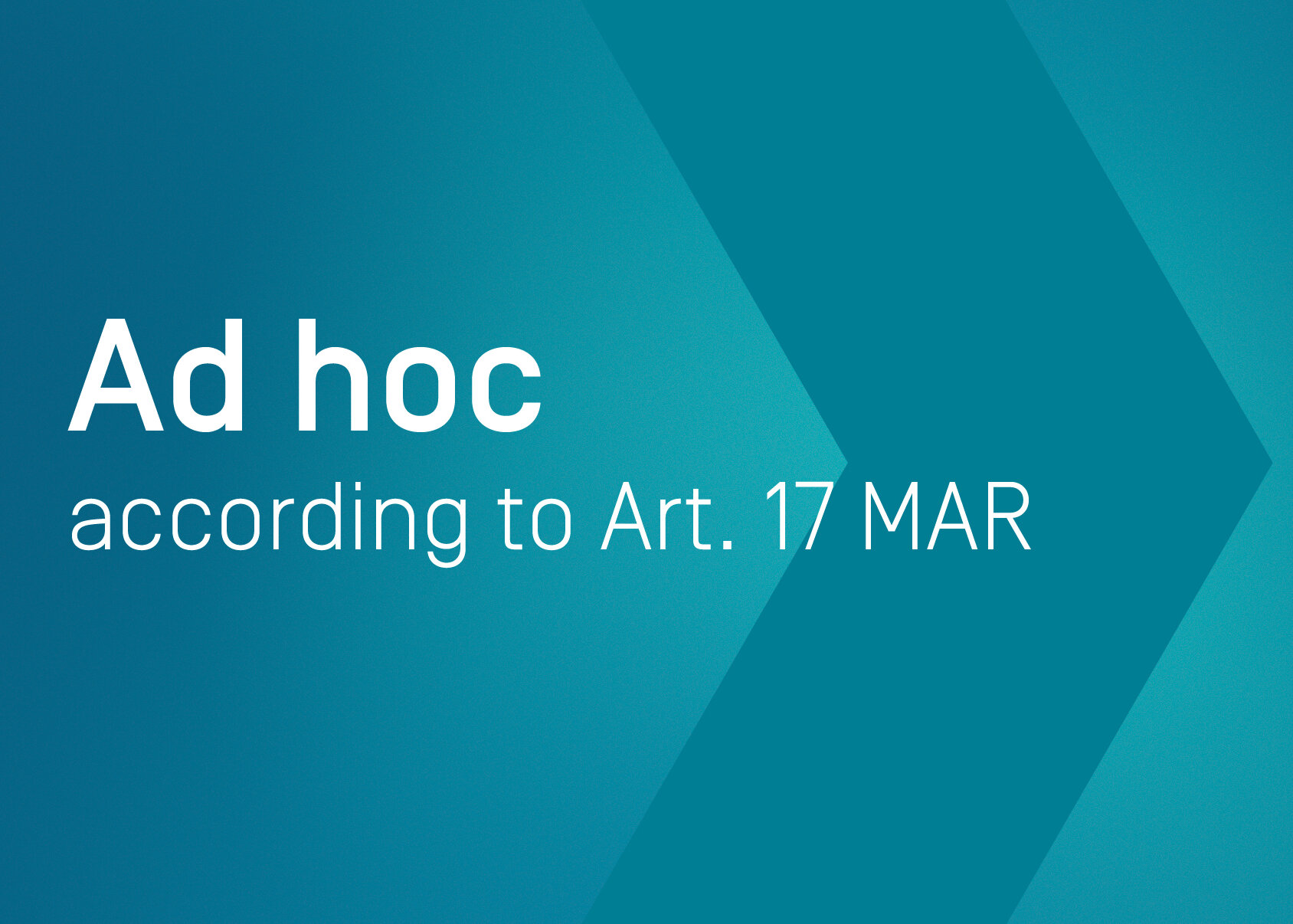 NOT FOR PUBLICATION, DISTRIBUTION OR RELEASE IN OR INTO THE UNITED STATES OF AMERICA, AUSTRALIA, CANADA, SOUTH AFRICA OR JAPAN, OR ANY OTHER JURISDICTION IN WHICH OFFERS OR SALES OF SECURITIES WOULD BE PROHIBITED BY APPLICABLE LAW. OTHER RESTRICTIONS ARE APPLICABLE. PLEASE SEE THE IMPORTANT NOTICE AT THE END OF THE DOCUMENT.

(07:51 AM) The Management Board of SGL Carbon SE (the "Issuer" together with its subsidiaries, "SGL Carbon") resolved today, with the consent of the Supervisory Board, to issue unsubordinated, unsecured notes convertible into no-par value ordinary shares of the Issuer (the "Convertible Notes"). The Convertible Notes will be offered only to institutional investors outside the United States of America by way of an accelerated bookbuilding (the "Offering"). The pre-emptive rights (Bezugsrechte) of existing shareholders of the Issuer to subscribe to the Convertible Notes are excluded.

The Convertible Notes shall be convertible into up to approximately 12.234 million no-par value ordinary shares of SGL Carbon SE and are expected to have an aggregate principal amount of approximately € 160 million. It is contemplated that the Convertible Notes have a maturity of 5 years, and will be issued and redeemed at 100% of their principal amount with a coupon of between 2.25% and 3.00% p.a., payable semi-annually in arrear on March 20 and September 20, commencing on March 20, 2019. The initial conversion price will be set at a premium of 30% – 35% above the volume weighted average price of SGL Carbon SE's shares on XETRA between launch and pricing.

SKion GmbH, the main shareholder of the Company, has indicated interest to place an order in the accelerated bookbuilding.

SGL Carbon SE intends to list the Convertible Notes on the Open Market (Freiverkehr) segment of the Frankfurt Stock Exchange. However, settlement and closing of the Offering is not conditional upon obtaining such inclusion to trading.

SGL Carbon SE plans to use the proceeds from the Offering to refinance existing debt, prolong the maturity profile, increase financial flexibility for further growth and for general corporate purposes.

SGL Carbon is a technology-based company and world leader in the development and production of carbon-based solutions. Its high-quality materials and products made from specialty graphite and composites are used in industrial sectors that determine the future: automotive, aerospace, solar and wind energy, semiconductor and LEDs as well as in the production of lithium-ion batteries and other energy storage systems. In addition, SGL Carbon develops solutions for chemical and industrial applications.

In 2017, SGL Carbon generated sales of around 860 million euros. As of December 31, 2017, the company had approximately 4,200 employees worldwide in 34 locations in Europe, North America, and Asia.

Materials, products and solutions from SGL Carbon are embedded in the major topics of the future: sustainable mobility, new energies and cross-industry digitization. Further developments in these areas demand more intelligent, more efficient, networked and sustainable solutions. This is where the entrepreneurial vision of SGL Carbon evolves around: contributing to a smarter world.

This announcement is not for publication or distribution, directly or indirectly, in or into the United States. The distribution of this announcement and the offer and sale of the securities referred to herein may be restricted by law in certain jurisdictions. and persons into whose possession any document or other information referred to herein comes should inform themselves about and observe any such restriction. Any failure to comply with these restrictions may constitute a violation of the securities laws of any such jurisdiction.

In the United Kingdom, this announcement is directed only at, Qualified Investors (i) who have professional experience in matters relating to investments falling within Article 19(5) of the Financial Services and Markets Act 2000 (Financial Promotion) Order 2005, as amended (the "Order") or (ii) who fall within Article 49(2)(a) to (d) of the Order, and (iii) to whom it may otherwise lawfully be communicated (all such persons together being referred to as "relevant persons"). This announcement must not be acted on or relied on (i) in the United Kingdom, by persons who are not relevant persons, and (ii) in any member state of the European Economic Area other than the United Kingdom, by persons who are not Qualified Investors.

The Issuer and its respective affiliates expressly disclaims any obligation or undertaking to update, review or revise any forward looking statement contained in this announcement whether as a result of new information, future developments or otherwise.

The date of admission of the Convertible Notes and the shares issued upon conversion to trading may be influenced by things such as market conditions. There is no guarantee that admission will occur and you should not base your financial decisions on the Issuer's intentions in relation to admission at this stage. Acquiring investments to which this announcement relates may expose an investor to a significant risk of losing all of the amount invested. Persons considering making such investments should consult an authorised person specialising in advising on such investments. This announcement does not constitute a recommendation concerning the Convertible Notes offering. The value of shares can decrease as well as increase. Potential investors should consult a professional advisor as to the suitability of the Convertible Notes offering for the person concerned.